One of the benefits of living in China is that despite the country’s megalithic size, it borders a number of other countries making for some interesting travel in those regions—so why not take advantage of some of China’s border crossings and make the leap into the rest of Asia? But make sure you have your China visa in order if you plan to come back through the PRC!

Fit snugly between China’s Yunnan Province, Vietnam and Thailand, Laos shares the lush, green landscape of its neighbors. But in sharp contrast to the frenetic pace of even some of the smaller cities in these surrounding regions, Laos maintains a laid back reputation among travelers in Southeast Asia. Life moves slower in Laos—in Luang Prabang, one of the larger towns in Laos, bars even have an 11:30pm curfew. But partying isn’t the reason to go to Laos (that’s what Thailand’s for)….

China to Laos for the Adventurous Step 1: From Xishuangbanna to Luang Namtha

Daily buses run from Jinghong, the capital of Xishuangbanna Autonomous Dai Prefecture in Yunnan Province, to Luang Namtha in the northern part of Laos. The bus (RMB 70), which takes roughly seven hours, leaves from Jinghong Bus Station in the morning, so get your ticket a day in advance and spend some time checking out a few Xishuangbanna attractions.

The bus picks up passengers at one other station before stopping at the border town of Mengla for lunch—it’s also possible, though not always easy or reliable, to hop on the bus here. The restaurant directly opposite the exit of the bus station has solid dishes, including “fish-flavored” eggplant .

Those with traveling with food allergies beware: they’re fond of peanut oil around here, but willing to make exceptions if you can communicate it. The border crossing on the Chinese side includes a run through immigration, just like at the airport. On the Laos side, the bus drives to a long building where you’re quickly taken through the visa process (it’s printed out and stuck in your passport).

You’ll need a passport photo, your passport and enough cash (ranging from USD 20 for Chinese passport holders to USD 42 for Canadian passport holders, though for most countries the cost is ~USD 30). A building nearby offers money changing and travelers’ insurance. Even if your bus driver makes fun of you, there’s no shame in insuring yourself on the road. The more daring travelers can bike from China to Laos, but as it’s been a few years, we can’t comment on the feasibility or safety today.

Located some 50 km (31 mi) from the Chinese border, the town of Luang Namtha is for many just a stop on the bus route from China to Laos, which is a shame as the city makes a great base for treks into the surrounding area. Luang Namtha consists of one main street with a few blocks on either side, though it also sports an airport (domestic flights only), bus station and a scattering of villages in the surrounding area.

In the center of town a number of guesthouses and restaurants for travelers line the main street that centers on a large bank and a night market that fills up with food sellers at night. Although Western food is readily available, nothing goes better with a cold Beerlao than a classic Lao meal like laab, thin-sliced or minced meat with garlic and mint.

The Luang Nam Tha Museum is located along the main street, but the best part about this Lao town is getting out of town, and companies all along the main drag offer single or multi-day treks. For those looking to do things independently, bike and moped rentals are available as well. Grab a map and plan your route—talk to the friendly locals who are happy to recommend the best places to visit.

The Zuela Guesthouse offers well-priced rooms and a restaurant with Lao and Western food. They also offer moped and bicycle rentals, transportation and day treks. Guesthouses can help you arrange transport to other cities in Laos. Minivans are usually a faster option than the tourist buses and limited flights can be found at the local airport. Daily buses and minivans leave from the bus station in the morning bound for Luang Prabang—a ten to 12 hour drive, but well worth it.

The fusing of traditional wat (Buddhist temples) with 19th century French colonial architecture is what scored Laos’ ancient capital UNESCO World Heritage site status. A laid back town with a strip of cafés and restaurants catering to the backpacker/flashpacker crowd (not unlike Yangshuo in Guangxi Province), Luang Prabang is the ultimate destination for many travelers to Laos.

Temples abound, like the impressive Wat Xieng Thong (located at the junctions of the Mekong and Nam Khan Rivers), and bustle with young monks, many of whom are eager to practice their English or French. Survey the town from atop Phou Si—it’s a large hill in the center of town that is the perfect place get your bearings and to watch the sun rise or set.

Local culture and traditions here carry on alongside the more recently introduced tourism culture. At 5am, a morning market starts on a narrow street beside the Royal Palace Museum, followed by processions of monks receiving morning alms (often of food bought from the market). At night, local food stands setup along another narrow street while the tourist-aimed night market appears on the main drag selling all sorts of great Laos souvenirs.

After dinner, bars like Utopia and Hive Bar are just a tuk tuk ride away, but close by law at 11:30pm (but the party doesn’t need to end… there’s bowling—ask a tuk tuk driver).

Getting out of town by day is no problem, as trekking companies offer elephant rides and elephant bathing, hikes to waterfalls like Kuang Si and the adjacent bear sanctuary, and other attractions in the surrounding area.

From Kunming to Vientiane

There are regular Jinghong is just a bus ride or a flight away (Kunming to Jinghong flight stake just 45 minutes). Alternatively, a bus heads to the capital, Vientiane, for around RMB 500 from the Southern Long Distance Bus Station in Kunming. It’s a long ride—over 20 hours, and as long as 35 hours according to some—but with enough stops for bathroom breaks and meals.

Again, it’s best to book ahead of time—in many cases Kunming-Vientaine bus tickets are sold out 24 hours in advance. The sleeper bus is not a great option for taller travelers, and the hairpin turns mean packing some motion sickness medication is a good idea. The bus also stops in Luang Prabang along with a few other cities that can make good alternative stops if you don’t feel like going all the way down to the capital. .

The capital city of Laos, Vientiane doesn’t have the pull of Luang Prabang, but shares its mix of beautiful Buddhist temples and French colonial architecture-in-slow-decay. Compared to sleepy town Luang Prabang, Vientiane is a sleepy city with larger boulevards and more development, but without the high-rise frenzy of other Southeast Asian capitals. It is also home to more than 30 Buddhist temples and an interesting (some would say bizarre) collection of Buddhist statuary in the Xieng Khuan Buddhist Park. For those moving on to other Southeast Asian cities, Vientiane’s airport offers direct and connecting flights to other Asian destinations and the Friendship Bridge right outside the city heads right into Thailand. 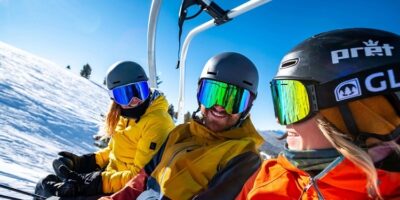